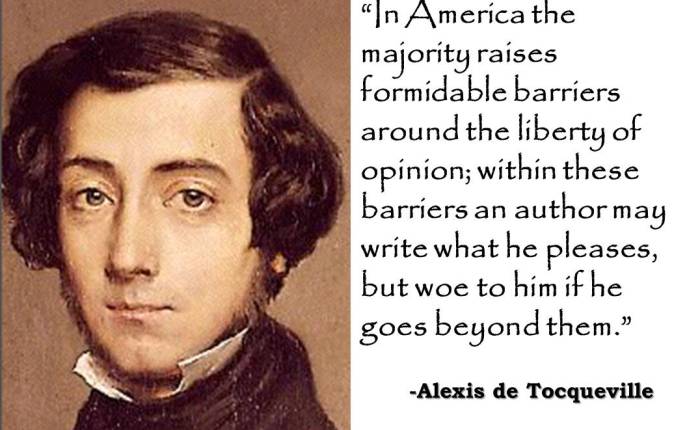 It is obvious that Alexis de Tocqueville, writing in the first half of the 19th Century, believed that the narrow experience and prejudice of the majority within the young United States would silence any voice outside their own, limited by ideas of decency and what was right.  I have no doubt that many people writing, speaking, or creating …something…in today’s increasingly visible public square believe that they are shouting from beyond the barriers raised by the rabble that is the majority. And they consider it a badge of honor.

But Alexis de Tocqueville could not imagine the world we live in, or the mediums that give a voice to those on the outside.  And he could not foresee a day when control of the medium would confer more power than the common square, and the barriers constructed against the liberty of opinion would be directed inward, not outward.  He, like some of the founding fathers and political philosophers like John Stuart Mill, feared a tyranny of the majority, never guessing technology would make the possibility of the tyranny they imagined obsolete.

It is the loud, the aggrieved, the self-righteous and the ambitious who man the barricades now, enabled by their sycophants in the new medium.  They hear no other voices – they have no wish to – and have convinced themselves that no other voices are worth hearing.  If the tyrants exist outside any consensus of opinion, then it is that opinion that must be wrong.  Stupid, or bigoted or backward.  Obviously hurtful or even harmful, it’s best ignored – or better yet, silenced.  Their pain is anecdotal, their fear is unwarranted, their anger is a threat.

Why keep them around at all?  Oh yes, they pay for everything.  If only they’d learn their place.

And so, if Alexis de Tocqueville were to visit us again today, he would see his fears of a tyranny of the majority were unfounded.  No threat there.  Unintentionally lumped into one massive community, their voices fade into a background hum, insignificant and slightly annoying.  Despised, exploited and ignored.

Except every now and then, when they forget their place, and terrify their tyrants by reminding them just who really is outside those formidable barriers.  It will take a effort of vitriol and contempt by the tyrants and their sycophants to put them back in their place.